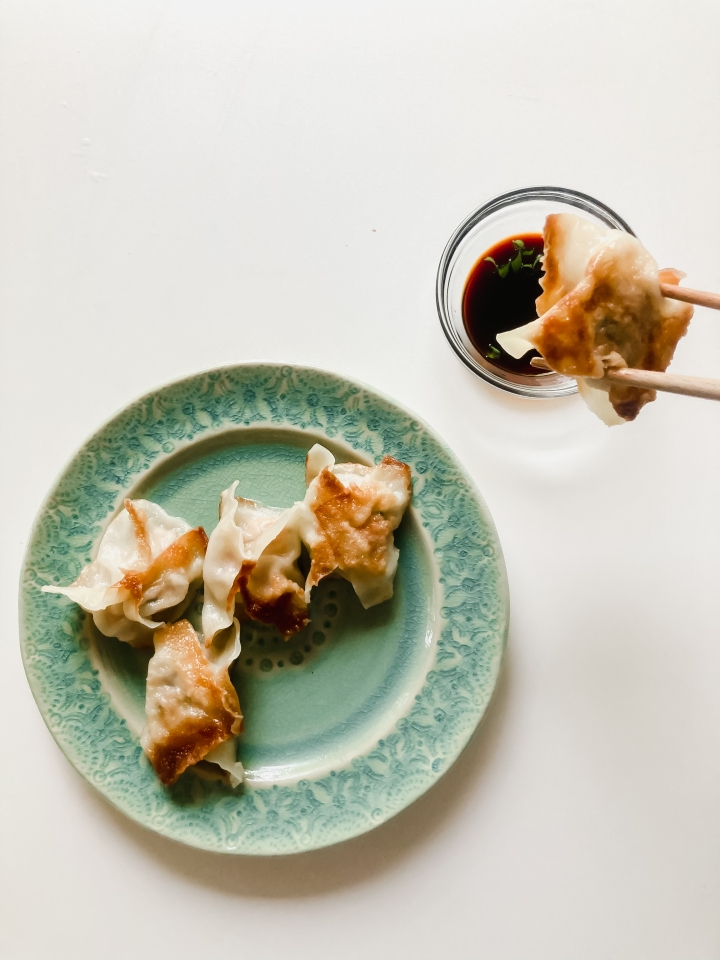 Hi, how are you all? I hope everybody is getting ready for a much better summer than last year. Things are slowly reopening in the Twin Cities. Hennepin County still has a lot of cases going on, so the mask mandate is still in effect in Minneapolis, but here and there you can see restaurants with a few tables outside on their patios. It is so nice that the weather has warmed up and this past weekend, it felt truly like summer: it was 80 degrees, sunny, and people were resorting to their swimming pools, cabins, and lakes to refresh themselves and catch some much-needed sun and vitamin D.

We had our first guest for an alfresco meal, our dear friend Andy, and we had a wonderful time, and we are hoping that there can be many such outdoor gatherings this summer. In the meantime, some of my pandemic habits have remained around food, and not just wearing the mask. Because restaurant restrictions were so strict the last 15 months, we learned to make a lot more savory dishes for date night over the weekend. One of these was a weekly Asian dinner night with the reviving of one of Dan’s family classics: jiaozi.

If you haven’t heard of jiaozi (餃子), they are a Chinese dumpling commonly eaten in China and many other parts of East Asia. They are eaten year-round in the northern provinces and are a great favorite during Lunar New Year. In the Western world, they are sometimes called pot stickers, a term that was first coined in 1945. Jiaozi consist of a ground meat or vegetable filling rolled into a thin piece of dough which is then sealed and pleated by pressing the edges together. They are usually boiled, steamed, or pan-fried, and are served with dipping sauce or with soup. They can be eaten for breakfast, lunch, or dinner, served as an appetizer or main course.

There are not many facts, and there are a lot of legends, when it comes to the origin of jiaozi. Some theories suggest that they originated from dumplings in Western Asia, and they appear in documents during the Eastern Han Dynasty, the Three Kingdoms period, and during the Northern Qi dynasty. According to legend, they were invented by Zhang Zhongjing, who was a famous practitioner of Chinese medicine during the Eastern Han Dynasty, AD 25-220. This medical saint was returning to his ancestral village during the winter and he encountered many poor people who were suffering from a lack of warm clothes and food, and suffering from frostbite around their ears. Zhang, determined to help these impoverished patients, cooked meat, spices, and some Chinese medicinal herbs, shredding them, making a filling, wrapping them in dough, and pleating them for the dumplings to look like horns or ears. The dumplings were boiled. Everyone who was suffering from frostbite and febrile disease was given two “ear dumplings” along with a bowl of broth to heal from the ear frostbite. He continued this treatment of his patients every day until Lunar New Year, or until they recovered. In this way, the febrile epidemic in the region was soon eradicated! And so it is that other people began imitating Zhang’s recipe to treat frostbite and celebrate the Lunar New Year. Zhang continued distributing the dumplings among the villagers until everyone had recovered from their illness and frostbite. Although in the beginning, dumplings were usually made with lamb, pepper, and a few herbs, many other fillings have been tried since then, with families coming up with their own varieties and family recipes.

Daniel used to make jiaozi with his grandfather and grandmother and it was one of the family favorites along with Chinese scallion pancakes. The traditional family filling included ground pork and cabbage, and Dan always enjoyed participating in these family cooking events with Nie-Nie and Yeh-Yeh. Sometimes, the whole family would pitch in when they visited Aunt Lucy, Uncle Bob and Dan’s four cousins. Every kid had a task, and Dan’s was chopping scallions for the filling. Nie-Nie and Yeh-Yeh were the experts at folding the jiaozi into their half-moon shape. Dan remembers making the family’s old jiaozi recipe, so fragrant with scallions and ginger and the smell of frying oil, and the cacophony of voices as they all cooked and talked together and the dumplings got transformed into beautiful, edible origami. In their cozy Queens apartment filled with artifacts and souvenirs from around the globe, Dan truly felt he was transported to another world beyond the US, beyond New York City, and into an enchanted world of delicious flavors and enchanting landscapes.

This past weekend, we finally recorded the traditional recipe and also came up with a new favorite to reflect the ingredients of the Midwest. Dan adapted it, choosing a healthier meat and substituting ground chicken for ground pork, and we relied on uncooked, grated butternut squash as the main vegetable to confer some natural sweetness instead of the traditional cabbage. The mildness of the chicken complements the sweetness of the grated butternut squash nicely, and the chopped scallions and grated ginger add a kick . You could substitute ground pork for the chicken in this recipe if you want a more traditional flavor, and the filling will still work very well and taste delicious. The first few jiaozi that we folded took a lot of practice, but after the first 5 to 7, we felt more comfortable. Personally, I found that the folding of the dumplings was so immensely peaceful and inspired in me a sense of serenity and calm. All in all, we made over 3 dozen jiaozi, and after setting aside 18 for the main meal, we froze the rest, to be made at a different time. Finally, the jiaozi are cooked first by being pan fried, then adding boiling water to the pan to finish the cooking. If for me the most fun part was the pleating and folding, for Dan the most exciting part was seeing the dumplings emerge from the cast-iron pan with their golden-brown markings looking just like those he remembered from Yeh-Yeh and Nie-Nie’s kitchen.

It was so fun to be able to do food prep together like this while talking and sharing stories! I tried to imagine Aunt Lucy and Nie-Nie preparing the filling and Dan as a little boy chopping the scallions, and Yeh-Yeh telling stories of his travels around the world while they all sat at the table. It’s traditions like this that keep our loved ones and all of their ancestors alive and sharing the traditions allows them to be passed on. I feel so honored to be a part of it with Dan’s family! Even if restaurants reopen and resume their normal in-person dining practices, I doubt we will ever lose the practice of a weekly Asian dinner night making our favorite Chinese family recipes.